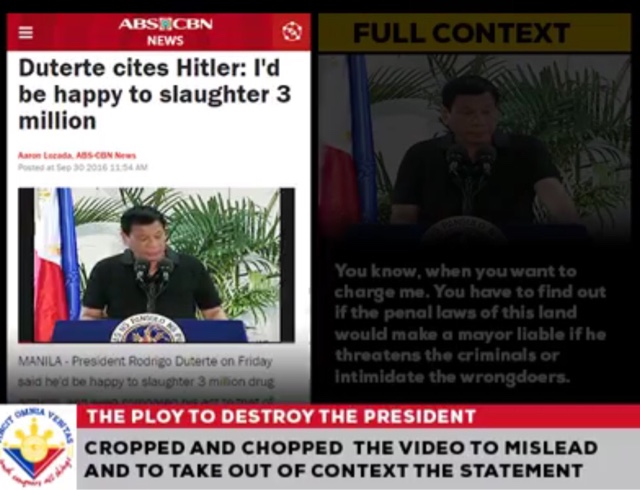 Some groups are out to discredit our president by cropping and chopping every video of his speeches to take his statements out of context. Sad to say that these people are from mainstream media.

It is no surprise as they did this even before and during the campaign period. Everybody knows who they wanted to win. We took the battle to social media and we prevailed.

I say that these people are all idiots and those who would believe those idiots are morons. Are you one of them?

President Duterte may be foul mouthed but he is no idiot. He knows what he is doing and he is simply fulfilling his campaign promises to the Filipino people who voted for him exactly because of those promises. He is putting an end to the very serious drug problem of our country that no one before him was able to do. And, he has done much in a very short span of time.

If you want a different president, wait for your turn on the next elections because President Duterte is old and no longer willing to perpetuate himself in power after his term. He is just doing his job and keeping his word. Let him do his job and stay out of the way.

I also support his stand that no foreign country has the right to interfere in our domestic affairs. Our government is not targeting innocent lives. Our government is targeting henious criminals who have no conscience and abuse our innocent civilians. These people rape innocent women even children, kill innocent civilians, kidnap innocent people, destroy the lives of our youths due to drugs and many more. If you ask me and I don't care what anybody might think or say about me but I say those henious criminals do not deserve to live.

We, the supporters of President Rody Duterte and the over 16million Filipinos who voted him firmly believe that our President is doing the right thing and would make our nation great again.