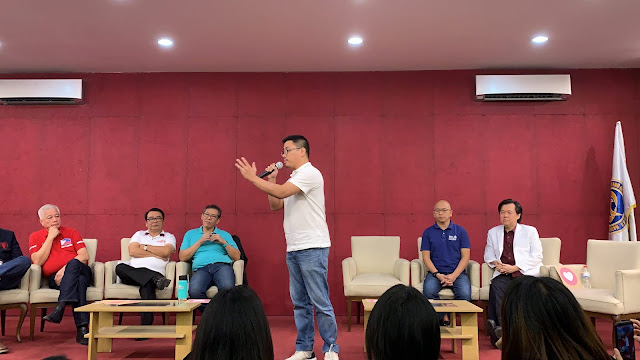 As a student:
Elmer studied and graduated Elementary and High School at Colegio San Agustin - Dasmariñas Village, Makati in 1992 and 1996 respectively. He was an officer of the Adeodatus Scholarship Trust Foundation and Sandigan Social Studies Club both focused on providing assistance and opportunities to the less fortunate but deserving youth. In college, he took up Bachelor of Science in Physics at De La Salle University, Manila, and Arts Bachelor in Consular and Diplomatic Affairs at De La Salle University - College of St. Benilde and graduated in 2002. Elmer was an officer of the Physics Society from 1996 to 1999 and the Batch President for College of Science of the DLSU Student Council from 1996 to 1997. He also participated in the mock United Nations Assembly in 2001.

As a young leader and philanthropist:
Elmer was the President of the Las Piñas Mabuhay Jaycees at the age of 18. His inducting officers were then Las Piñas City Congresswoman now number 1 Senator Cynthia Aguilar-Villar and then Jaycee National President Jimmy Yaokasin. During his term as President, the chapter hosted and organized various Jaycee activities including the Metro Area Conference, Ten Outstanding Young Men awards (TOYM), was part of the organizing committee of the Metro Area Mini Olympics (MAMO), organized tree planting activities, conducted weekly feeding programs for children, donated wheelchairs for the disabled, organized a number of medical and dental missions, provided scholarships to deserving students of Las Piñas City, provided livelihood projects in cooperation with different Barangay Officials of Las Piñas City, conducted various leadership seminars for the youth and members as well, awarded outstanding teachers and outstanding student leaders in public schools, and the list goes on. He firmly believes in the essence of the Jaycee Creed especially the last line, "And that service to humanity is the best work of life."

As a husband and a father:
In 2002, Elmer married Michelle Tiu Cabrera-Francisco from the City of Cagayan de Oro and they have one son, Dominic Cabrera Francisco. He is a very faithful husband and a very dedicated father who makes it a point to always spend time with his family despite his very hectic schedule. He says, "It's all about time management, creating an efficient system, hiring good people and loving what you do." He also follows one of his favorite quotes from the movie 'The Godfather', "A man can never be a real man if he doesn't spend time with his family."

As a businessman:
Elmer learned the ropes of business early in life while helping out his father in the family automotive business. Due to his early training, he was able to engage in business and profession early in life in diversed industries such as Automotive Manufacturing, Retailing and Servicing, Information Technology, Trading, Technical Education, Security and Manpower Services, Firearms and Ammunition Importation and Retailing, Game of the Generals Board Game Global Distribution, Real Estate, Insurance (Life, Non-Life, Invesment Linked), etc. He is a Professional Regulation Commission (PRC) Licensed Real Estate Broker and Insurance Commission Licensed Financial Advisor. His latest business venture is Elmer Francisco Industries, Inc. (EFI) with the trade name Francisco Passenger Jeepney that manufactures and distributes modernized Francisco Passenger Jeepneys (FPJ) powered by Euro IV compliant diesel engines and Full Electric variant. EFI also engages in other electric vehicles such as e-trikes, e-buses, e-taxis, e-delivery vans, e-amphibians, e-boats, e-flying cars and other electric vehicles. Elmer also ventured into cryptocurrencies and FinTech (Financial Technology). He also owns 1111 Empire, Inc., a real estate development, management and brokerage company. The company also globally distributes the award winning Filipino invented board game named "Game of the Generals" invented by Sofronio “Ronnie” Pasola in the 1970's. Business is a very tricky craft wherein you can't possibly have it all, but there is always plenty for everybody. The trick is that you lose some but you gain even more. As Confucius says, "Our greatest glory is not in never falling, but in rising every time we fall."

As a more mature leader and philanthropist:
In 2007, Elmer joined the Rotary Club of West Cagayan de Oro and became the youngest member of the club. He was given a task as the Information and Communication Technology (ICT) Club Director for Rotary Year 2007-2009, ICT District 3870 Chairman for Rotary Year 2008-2009, Rotary International Convention "On To Montreal" District 3870 Chairman for Rotary Year 2009-2010, Rotary Youth Exchange Club Chairman for Rotary Year 2010-2011, Club Vice-President for Rotary Year 2011-2012 and Zone 1 District 3870 Information Officer for Rotary Year 2011-2012. He then transferred to One World Rotary, Rotary International District 5240, California, USA where they responded directly to the Yolanda Crisis in Tacloban City by donating Israeli-made water filtration devices that turns salt water to potable water and donating solar lights to the survivors. He is also a Paul Harris Fellow since 2008.  He is currently a member of Rotary Club of Makati West and part of the committee for the flagship Gift of Life project wherein the club sponsors pediatric heart surgeries. Elmer is an active member of ICPN (International Child Protection Network) of UK that protects children worldwide from abuse and trafficking. Elmer also currently spearheads his very own ElmerFrancisco.org, a philanthropic organization that distributes relief goods to survivors of natural calamities, provides livelihood to the less fortunate members of our society, promotes sports development for both adults and children, undertakes water projects like rain water catchments system for relocation sites, donates off-grid solar power systems to far flung barangays who are not being reached by the electric grid, etc.

As a business leader:
Also in 2007, Elmer joined the Cagayan de Oro Chamber of Commerce and Industry Foundation (Oro Chamber) and became a Trustee from 2008 to 2009 representing the Trade and Commerce Sector. As a Past Trustee, he was given a task as the Media Relations and Communications Committee Chairman of the Chamber from 2010 to 2013. The Oro Chamber is the voice of business in Northern Mindanao. Elmer actively participated in the organization's spearheading advocacies that affect the local and regional businesses such as the controversial protest against the BIR harassment, continuing search for solutions regarding the Mindanao power shortage and other power related issues that gravely affect the businesses and investments in Mindanao, the Oro Best Expo in cooperation with Then US Ambassador Harry K. Thomas, Jr., the US Commercial Service headed by then Commercial Attaché Mr. Patrick Wall of the US Embassy Manila, US Assistance for International Development (USAID) headed by Ms. Gloria Steele, the Department of Trade and Industries (DTI) Region X headed by Director Alice Eusenia and the Local Government of Cagayan de Oro City headed by then Mayor Vicente "Dongkoy" Y. Emano, among others. Elmer was also an invited delegate to the 1st US-ASEAN Business Forum at Cambodia in 2012 that coincided with the ASEAN Summit.

As a philanthropist:
Founded and aggressively operated ElmerFrancisco.org which is a philanthropic organization with various projects like SENDONGPRENEUR Project (that started immediately days after the December 16, 2011 flash flood), Isang Litrong Liwanag, Isang Litrong Bahay and SOAP for HOPE Project among others. Etymologically, SENDONGPRENEUR means SENDONG + MOTIVATED wherein the project was created mainly to provide start-up capitals and training for Tropical Storm Sendong Survivors in the temporary shelters, those who were displaced in the community and in the evacuation centers based on their skills and livelihood before and after the December 16, 2011 Flash Flood washed out their homes and affected their families. ElmerFrancisco.org is working closely with various government and non-government organizations as a group known as 'SENDONGPRENEUR Livelihood Cluster' together with DSWD-Department of Social Welfare Development, CSWD-City Social Welfare Development, DTI-Department of Trade and Industry, DOLE-Department of Labor and Employment, OB-Operation Blessing, CRS-Catholic Relief Service, HRC-Humanitarian Response Consortium, IDRN-International Disaster Response Network, ILO-International Labour Organization of the United Nations, UNDP-United Nations Development Programme, Child Fund International, UNFPA-United Nations Population Fund, Bangon Kagay-an, Kagay-an Kaniadto Community Chat among others.

Isang Litrong Liwanag is a project in cooperation with MyShelter Foundation of Ilac Diaz that produces Solar Bottle Bulbs (SBB) and aims to install a million SBBs. Isang Litrong Bahay is another project in cooperation with MyShelter Foundation that builds a training center to teach people how to build houses from empty PET Bottles with the help of DOST-Department of Science and Technology, MIT - Massachusetts Institute of Technology and Hassel Studios. With Isang Litrong Liwanag and Isang Litrong Bahay projects, we could keep away those empty PET Bottles that we just usually throw away and end up being burned in dumpsites or clogging our drainage systems; moreover, we could turn them into Solar Bottle Bulbs and affordable but reliable houses. The Soap for Hope (S4H) is a livelihood project in cooperation with Sealed Air (Diversey Corporation) of Singapore with its head office in New York represented by Mr. Stefan Phang.  S4H project donates the proprietary Soap making machines and also the raw materials to deserving groups and individuals in order for them to have a means of livelihood and also to promote hygienic and healthy practices. The Linens for Life project donated sewing machines and cloths so that the beneficiaries could be creative in making school uniforms, dresses, bags, etc.

As a Filipino Patriot:
Elmer dreams and envisions a strong Philippines where every Filipino would be proud to be a Filipino. It's no easy task but very possible. As Elmer says, "What really counts are 'WHAT you want' and 'WHY you want them', God and Universe will take care of 'HOW'. Just stay extremely focused and very positive no matter what is happening and do everything with LOVE." Francisco promotes national industrialization in order to generate millions of jobs and businesses for Filipinos at home especially in their own provinces so that they no longer have to leave their families at home to become OFWs. Elmer believes that if every Filipino would have a job and/or business with enough income, he would no longer need help from his government and fellow-Filipinos. He also promotes VEGANISM, of which he himself is VEGAN for over 3 years now wherein plant-based diet is being promoted as vegetables are much cheaper than meat, not to mention, much healthier that people could save from the costs of medicines and hospitalizations.

Francisco is a staunch advocate of Federalism, Economic Liberalism and shift to Parliamentary system of government for the Philippines which for him is the most responsive system that is applicable to the country to further its development and drastically improve the standards of living of the poor majority.

ELMER FRANCISCO ran for SENATOR under Partido Federal ng Pilipinas (PFP) for the May 13, 2019 elections and lost.

Elmer activated the FEDERALISTA Political Action Committee in order to further the agenda and PLATFORM that the group promotes. Click HERE to view the full PLATFORM. 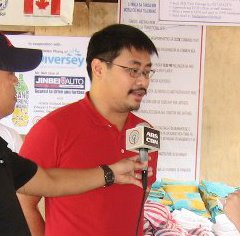