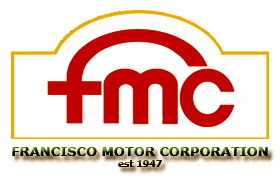 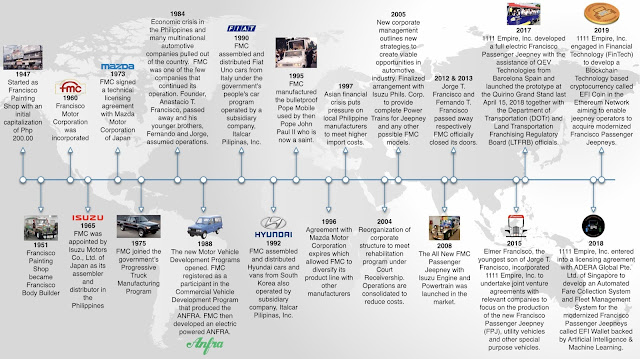 In 1947, Anastacio Trinidad Francisco established a small painting shop in Zapote, Las Pinas with a starting capital of Php 200.00 that specialized in painting jeepneys, cars and trucks.

Four years later, the small painting shop became the Francisco Body Builder (FBB) which engaged in the building of jeepney bodies. It became known as a reputable body builder with clients coming to the shop for the unique body designs from surplus jeepneys left after the war.

By 1955, FBB ventured into assembling a complete line of jeepneys using reconditioned engines from Japan. Also in the same year, the Luneta Motor Company became the company’s first distributor of FBB bodies. This marketing relationship continued to blossom and Luneta Motor Company – which was the franchised distributor of American Ford cars and Thames trucks – partnered with FBB to assemble Ford Consul and Thames light trucks.

Due to changes in the local market, FMC next partnered with Mazda for a new line of lights trucks for commercial use. This proved to be successful and FMC broadened its partnership with Mazda for other commercial vehicles as well as the provision of engines for its locally produced jeepneys and mini-buses.

The continued partnership with Mazda allowed FMC to actively participate and pioneer the development of the Asian Utility Vehicle under the government’s Progressive Truck Manufacturing Program. This resulted in the introduction of the Pinoy I, a Mazda 1200 cc powered vehicle, which was widely used at the Cultural Center of the Philippines. Further improvements on the Pinoy and a new version was introduced in 1979 as the Pinoy II.

As the company moved into the turbulent 80s, FMC joined the Commercial Vehicle Development Program, which replaced the Marcos-era PTMP under the Board of Investments. Under the program, FMC developed the ANFRA – a third generation Asian Utility Vehicle that was mainly used for commercial use.

In 1984, founder Anastacio T. Francisco passed away and his brother Jorge T. Francisco who was a Mechanical Engineer took over the operations together with another brother, Fernando T. Francisco.

By the 1990s, FMC emerged as one of the largest and only locally owned manufacturer and assembler of vehicles in the Philippines with over 60,000 units sold. It further expanded into the assembly and distribution of small engine displacement cars under license from Fiat of Italy. As the contract with Fiat expired, FMC tied up with Hyundai of Korea to assemble and distribute Hyundai cars and vans.

As the 1990s closed, FMC had been a strong player in the local automotive market; however, due to the Asian financial crisis of 1997, the company had experienced a series of setbacks that affected the financial viability of the company after more than 50 years of continued operations and growth.

By 2002 the company had filed for rehabilitation due to losses incurred in its operations. The economy was devastated by the financial crisis and FMC was not spared.

By 2004, FMC reorganized its corporate structure to meet the rehabilitation program under Court Receivership. Operations were consolidated to reduce costs.

By 2005, the new corporate management outlined new strategies to create viable opportunities in the automotive industry which later on finalised the agreement with Isuzu Phils. Corp. to provide complete powertrains for jeepneys and any other possible FMC models.

By 2008, the all new FMC Passenger Jeepney with Isuzu engine and powertrain was launched.

In 2017, the Department of Transportation of the Republic of the Philippines initiated the Public Utility Vehicles Modernization Program which aims to phase-out all Jeepneys that are 15 years old and older and replace them with brand new ones that conforms with the Philippine National Standards and powered by either an electric powertrain or at least a Euro 4 compliant diesel engine. To answer the call of the government for the PUV Modernization Program, 1111 Empire, Inc. developed a full electric Francisco Passenger Jeepney with the assistance of QEV Technologies from Barcelona Spain and launched the prototype at the Quirino Grand Stand last April 15, 2018 together with the Department of Transportation (DOTr) and Land Transportation Franchising Regulatory Board (LTFRB) officials.

In 2020, Elmer Francisco Industries, Inc. (EFI) with trade name Francisco Passenger Jeepney was incorporated with the Securities and Exchange Commission with an authorized capital stock of Php100million and a fully paid-up subscribed capital stock of Php100million. The primary purpose of the company is to manufacture all types of vehicles whether powered by internal combustion, electric or renewable energy. The secondary purpose is to efficiently operate the fleet of public utility vehicles.

Board Of Investments Registrations under E.O. 262

The need to introduce new models to the Philippine jeepney and AUV market is aimed at addressing the current aging fleet of jeepneys in the public transport sector. It must be noted that the current fleet is on average more than 15 years old. With an aging fleet of jeepneys that are primarily reconditioned units or powered by second hand diesel engines, there is an urgent need to replace these with units that are compliant to the Clean Air Act. At present, there are approximately 250,000 jeepneys operating in the Philippines with concentration of operations in Metro Manila and its nearby provinces. In the other parts of the country, the jeepney represents a cheap and convenient means of transportation as well.

Based on the above, Elmer Francisco Industries, Inc., in partnership with Isuzu Philippines Corp. (IPC) and other relevant companies, is set to embark on a new program that addresses these major concerns of the Philippine transport sector.

The program intends to focus on the provision of competitively priced brand new jeepney units anchored on the Isuzu’s powertrain and full electric powertrain business. Based on market data, the secondary market for jeepneys sell on average at about Php2million with prices reaching Php2.5million. With this in mind, EFI believes that in order to penetrate the jeepney market with brand new jeepneys, pricing is a critical point. As such, the cost of manufacturing and assembly should be able to match current pricing practices and yet provide adequate margins in order to sustain operations. We believe that in order to re-develop the brand new jeepney market, we have to price competitively. In order to do this, we are looking at increased market share in the next 6 months and introduce our new jeepneys at about 15% to 20% above the competition due to brand value. This pricing strategy calls for managing our manufacturing costs and rely on Isuzu Philippines’ and other powertrain suppliers’ ability to provide cost effective powertrains. We estimate that in order to be competitive, powertrain costs would account for 50% of total selling price of the finished jeepney. We propose that this pricing strategy would offer an affordable and yet reliable brand new jeepney to the market. In addition to eating into the second hand market, this pricing strategy will not eat into the current AUV market.

The local transport market is expected to shift to newer models in order to comply with the PUV Modernization Program and at the same time establish more profitable operations. The major stumbling blocks that face jeepney owners and operators as well as assemblers and manufacturers are:

EFI intends to address these concerns through: